Procrastination, thy name is Anne!

When we first arrived in Mohave Valley, AZ we anticipated maybe a week of work on the bus. Our friend Clifford Allen (and wife Sonja) have a big building in which to work on Liberty and Clifford has both the tools and expertise to work with LeRoy through the addition of engine brakes and some suspension work.

The suspension work was hard and took several days, but Liberty now sits several inches higher than before. We should no longer scrape on a marble in the street!

The next order of business was to take out the radiator so they could work on the engine brake (better known to me as jake brakes). And it seems to be all downhill from there. Sixteen bolts had to come out to remove the radiator…and 5 of them broke off. And that’s when the trouble started. Sometime in Liberty’s long life, the radiator bolts had been replaced by bolts that were too long. They touched the tubes inside the radiator and stuck against them. In drilling the bolts out, some of them pushed on through the tube and when they were removed, they left a hole. Well, not just one hole but one for each such bolt! And that IS the good news, because in dismantling the radiator, LeRoy found more trouble just waiting to happen which could have left us disabled alongside a road somewhere instead of in a nice barn with tools and help available. God uses ALL things, even what seems horrible to our finite thinking, to our advantage down the road. 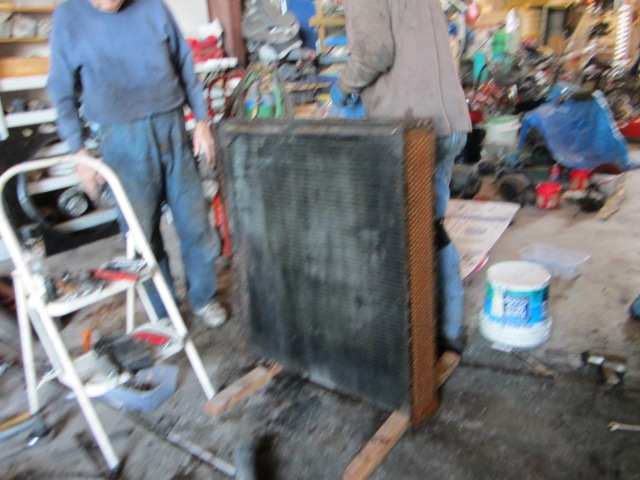 The timing wasn’t ideal, to say the least. This problem was discovered late Saturday afternoon, after all the logical sources for such parts had closed, so it was Monday morning before we could even get parts headed our way. And we thought we had done just that. We asked our supplier in Oklahoma City to overnight them to us, but late Tuesday we saw the UPS man just drive by, again after the supplier was closed. First thing this morning, LeRoy called to see if the parts had been shipped and learned that not only had they NOT been shipped, they didn’t even have the necessary parts! So the hunt began again on this end and, thanks to bus friends on the internet, we found a place in Kingman, AZ that might be able to help. LeRoy and I drove over there with one of the tanks in the trunk so see if they could get the gaskets we need. They don’t have them, but promised to search for a supplier or else make them themselves. Well, at least we saw some beautiful scenery on the drive from Bullhead City to Kingman.

For all our west coast friends, we also got to eat at In-N-Out burger, which is an experience unto itself! Now we’re back home, dealing with slow internet and premature posting of my unfinished post. Thanks for putting up with me!

4 Responses to Procrastination, thy name is Anne!