Before we came to Atlanta, we asked Alma, our granddaughter, and her mom Lisa to give us some suggestions of things we should see while we’re here. Near the top of Alma’s list was the World of Coca-Cola, so that was our destination today. 125 years ago yesterday, Coca-Cola was born and they are celebrating.

Worldwide, the Coca-Cola logo is one of the most easily recognized and the unique shape of the bottle itself is patented and from the bottles in the lobby on, the international flair of Coke was evident. Toward the end of the tour, we sampled flavors from all over the world. Some were okay, others were pretty yucky to my taste.

LeRoy found something that scratched his vehicular itch, too, and even that was international.

We found out that the wall hangings that advertised Coke for 5 cents were used beginning in the 1920s. I was really glad to know that they continued use for 3 decades, because I remember buying a Coke for a nickel at the drugstore in Osborne when we went to buy groceries once a week. Just to prove to you that we were both on today’s trip, we traded cameras with another couple at the marble topped soda fountain and after we took their picture, they took ours. 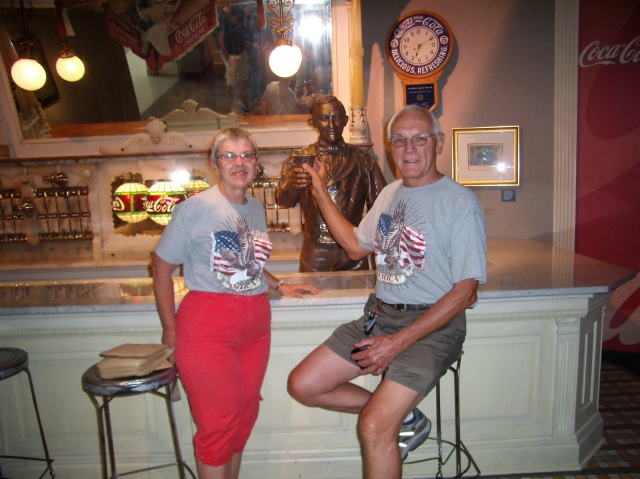 I remember touring the bottling company in Hays, KS when I was in high school, but the bottling assembly we watched today ran mostly without human help. I said mostly, because at one point, the robotic loading machine messed up the cardboard carton it was supposed to be picking up, then put the next one on top of the original crumpled one. It did take a human to straighten that one out and restart the process!

We found several connections to Kansas and Oklahoma. We learned that Coca-Cola was first bottled in Shawnee, OK in 1902 and in 1924, an automatic bottling machine was installed in Hutchinson, KS that more than doubled the daily output of the factory. But the thing that struck a more personal note was the collection of Olympic torches. The one on the left was designed by a friend of ours at Coleman Corp. in Wichita! 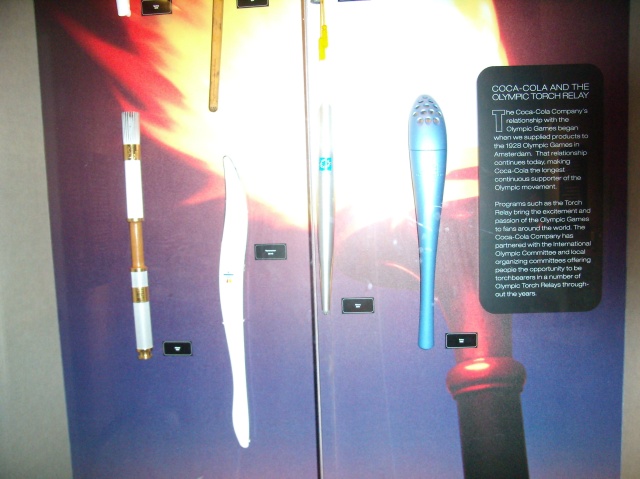 We enjoyed the history and we enjoyed the samples and we even enjoyed a hug from the Coca-Cola polar bear before exiting through (wait for it) the gift shop. 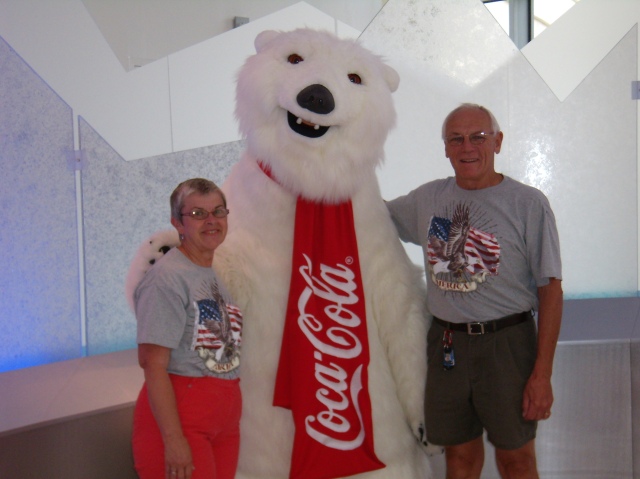