I love ya, tomorrow! You’re only a day away! And so, we are hopeful, is our new-to-us park model! We have photos of a finished floor and supposedly that was the only thing holding us up. I guess we’ll see what tomorrow brings!

We lost a dear friend this week. Paula and Max Reser had been our co-hosts at the Golden Bell RV park the last three summers and had become good friends, in addition to coworkers.

The first summers, they had two dachshunds, Bluebell and Redman and if she wasn’t working, one or the other of the dogs was with her. Last year, Bluebell was gone and they had added a cat, Gotcha. (Redman left them just after they visited us in Kansas in September.) This picture captured her  love for those babies exactly. 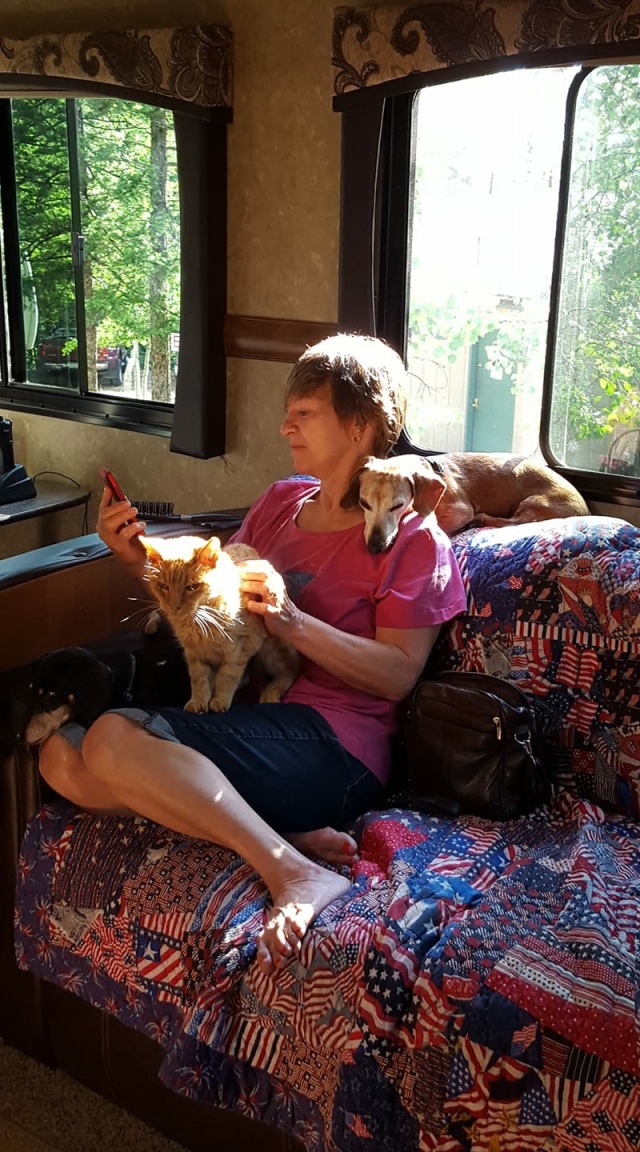 Paula, no bigger than a minute, could accomplish more in a day or a week than any two of the college age summer staffers. We worked well together, whether it was doing RV park registrations, cleaning bathrooms or making beds at the lodge. We made a pretty good team. But when it came to painting, Paula was the star! Her handiwork was seen all over the camp. Everywhere she went, she moved in a hurry and almost always in flip flops. I think someone(s) persuaded her to wear walking shoes to climb the Manitou Incline, but she was sure she could have done it without. In November, she got her first diagnosis of esophageal cancer that had spread to her liver and lungs. Just after Thanksgiving, she was told by her doctors that her liver was so full of tumors that chemo would be detrimental to her. She was moved to Hospice care on Wednesday and about midnight on Thursday night, Max called to say that she was gone. As he so aptly stated, she beat cancer and gained glory. See you in heaven, my sweet friend. Your smile was joy personified!