When we got the new turquoise paint job on Liberty last spring, we knew that awnings would have to be in our future because the old ones were bright blue. They were a good match when Liberty was blue, but not so much with the turquoise. Awnings served the purpose of keeping glare out, but they also blocked our view. In order to see out when the awnings were out, we had to duck and look under. We had made the decision to replace the ones we had, but didn’t know exactly what the fabric would be. Most awning companies use similar colors and none of them coordinated with turquoise. While we were in Albuquerque in October of 2010, we had windshield covers made that we can see through in the daytime but those outside can’t see in. We asked 5 Star Sunshades here in Yuma if they could make our new awnings out of that same fabric and they said they could. There was a minor hiccup this morning when the smaller awnings didn’t fit, but the front ones are just what we wanted.

Many hands make light work? Well, it took both of the crew from 5 Star and LeRoy to hang the first one, and me to hold a ladder.

Looking out with the old awnings 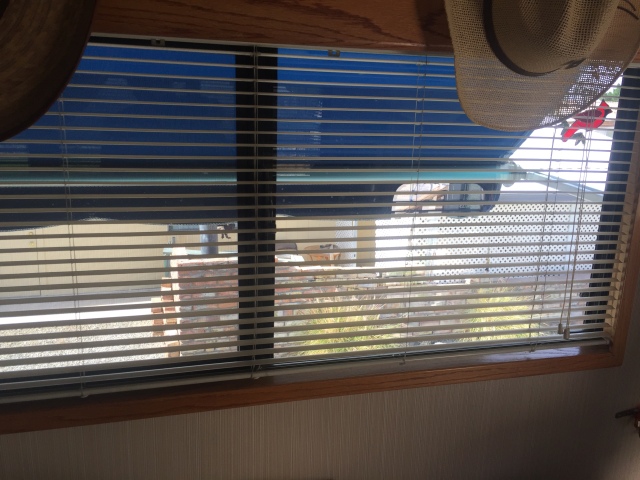 Looking out the other side with the new awning

Such a difference, but with the same glare-reducing effect. And from the outside, it just looks like the other window.

They’ll be back in a few days with the back awnings made to the correct measurements. We’re loving it already!