We started out the week with a party! Really, more of a work day for the men, kind of like a barn raising, except that they were moving a carport for a bus from one lot to the one directly behind it. Wilbur Bradbury had been told by the “experts” that his structure would have to be disassembled and reassembled on the other lot, but he wasn’t buying that. With enough bracing and cross-bracing, it was stable enough to move. He chained the structure to his Jeep and the “moving crew” helped to move it with short chunks of round fence posts as rollers on plywood. In just about an hour, the “impossible” task was completed. Many hands, much expertise, patience and lots of wives supervising made for light work!

One of the downsides to staying behind the church in Tucson for the past several winters was isolation. When we were the only ones staying behind the church, we often went days without seeing other people, except Pastor Adam, and he was busy at work. When we stayed at Desert Trails in the years before that, there were activities available all the time and people always nearby. When we bought this lot here in Yuma, we were hoping to get acquainted with our neighbors and have friends to do things with, but getting all the projects done pretty much kept us busy. We decided to take matters in our own hands and invited everyone on the block, plus our backyard neighbors and friends from here in Yuma to a Christmas open house on Wednesday afternoon. The first to arrive were bus friends and before long, the neighbors started trickling in until we had a patio and deck full! Several people brought treats to add to the candy, peanut butter cheese ball, Chex mix, chips and queso and several dozen cookies we already had and we ate and visited until almost dark. Everyone ate their fill and there were still leftovers. I think there were about 35 people who came and we had a great time.

After a day to wind down, we took a road trip on Friday to Boulder City, NV. Way back in the summer, we had made arrangements to buy two matching recliners from a bus acquaintance and thought we had a way to get them delivered here. That option fell through, so we drove the Escape up to pick them up. It was a long day’s drive, but we were pleased with the chairs. One of these days we will decide exactly where they are going in the bus and what is coming out. In the meantime, we have them sitting next to the garage in the casita. 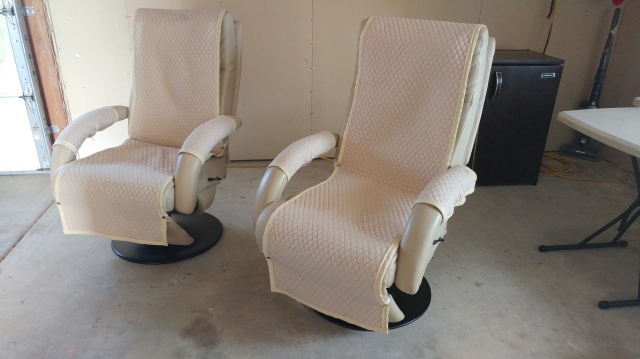 Food is always on our minds, it seems and this week was definitely no exception. A few weeks ago, I saw an ad for the Somerton Tamale Festival just a few miles away and kept the date on my phone calendar. I wasn’t sure what all it would be but I knew there would be tamales! As a kid growing up, the only thing I knew about tamales was that they came packed in a can and were covered in a red sauce and I didn’t like them. It wasn’t until Rob and his family were living in Sierra Vista, AZ that I tasted fresh homemade tamales and found out I liked them…a lot! In the summers we buy Brenda’s Tamales at the Woodland Park Farmer’s Market. The Tamale festival was Saturday so we took Richard and Patti Harper, whose rig is parked on our lot, and went to Somerton. Right where we walked in, a large stage was set up and there was entertainment all day. There was a contest to see who could eat the most tamales in 3 minutes OR who could eat 12 in the shortest amount of time. We didn’t take part in that, though! And yes, there were tamales, more than 40 vendors and who knows how many varieties. Among the four of us, we tried pork, beef, sweet corn, shrimp and two different kinds with pineapple. The sweet corn one was really interesting, lighter and sweeter, and the ones with pineapple were more of a dessert. My favorite? Definitely the pork, spicy and moist.

Some of our Friends friends have recommended over the years that we should visit the North Holtville Friends Church at Holtville, CA, about an hour from Yuma. We did just that this morning. The tiny little church was started in 1907 by two families from Haviland, KS who moved to the area and began dairy farming. The roads dwindle almost to nothing before you reach the little building sitting in a field surrounded by agriculture.

Inside, it was like stepping back a century, except for the electricity, but the gospel message, the story of the first Christmas, was fresh and real. Joanna Gaines (Fixer Upper) would love all the shiplap, floor to ceiling. We’re glad we visited.

2 Responses to Party on!