It feels as though we’ve been spinning for a while now and are finally coming to a stop. When I wrote last, we had Raymond settled in Sierra Healthcare facility in Truth or Consequences. From the beginning, we had real concerns about the rehab part of that facility and we expressed those concerns to the administration. Some things were remedied, some were not. One of our biggest concerns was that Raymond’s room did not have a working call system. He would push his nurse call button and get no response. Sure enough, the buttons in his room did not work, so they gave him a bell to ring until they could get them fixed. If the nursing personnel were not right outside his room, no one could hear it. In the week that he spent there, “therapy”, which was supposed to be three hours a day may have happened for a total of an hour. We were becoming more and more unhappy with his care, when it was all taken out of our hands anyway. We had told the staff that the hospital said his staples should come out by August 5, but when they started to do that, they decided it didn’t look right, so sent him to the emergency room at the hospital there. Later that afternoon, he was transferred back to Mountain View Hospital in Las Cruces, where his surgery had been done. After several days there and another surgical procedure, he came to the conclusion that he doesn’t want to go back to Truth or Consequences at all! Medical care is a long ambulance ride away each time.

So we went back up to his apartment and cleaned out all of his personal belongings and gave notice that he will be vacating by August 31. It’s amazing how much has to be done to accomplish that! Our checklist is still not finished, but as of late afternoon on Friday, Raymond is a patient at Advanced Care Hospital of Southern New Mexico. This was his limo!

Today when we went to see him, this is how we found him. 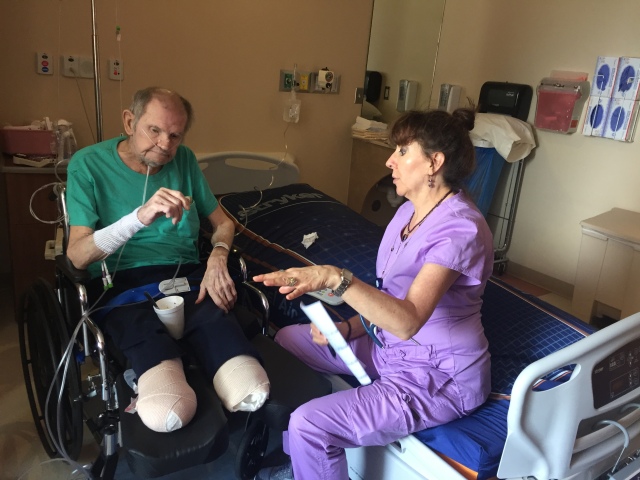 He’s learning to adjust to the schedule of the hospital and it hasn’t been easy for him, as the look on his face shows. This was his respiratory therapist explaining a few things. Tomorrow his therapy starts in earnest.

Seven years ago just a little later than this in August, we left on this adventure we call retired living. We envisioned seeing all sorts of interesting and exciting things, things that I could make into a fascinating blog. Not once did we envision this aspect of freedom, the freedom to take care of Raymond and all his business affairs, but I believe God put us in this lifestyle to give us the time and ability to serve in just this way. Colossians 3:23 says to work willingly at whatever you do, as though you were working for the Lord rather than for people. Sometimes that means hosting an RV park and sometimes it means taking care of a frail gentleman who is helpless without you.

Stay tuned. I believe God isn’t through with us yet!