Family fun is over

Heidi and Jadelyn got here Monday night after midnight and we’ve had a great time this week. We were on duty at the RV park on Tuesday, so they got to help clean showers and toilets. It was nice to have help!

One of the things Jadelyn enjoyed last year when she was here was touring the Molly Kathleen mine at Cripple Creek. Heidi had never done that. When our kids were little, we did a lot of window shopping in gift shops but we never did tourist things that cost money!

The signs are always fun and this one would have been especially apropos in a packed 9-man elevator cage!

It’s always interesting to hear a different guide tell the story of the early days in the Cripple Creek mining district. Mostly they tell the same things, with their own twist on stories, but the one story that remains the same is about what was required of a mucker. Each had to fill one and one-half ore cars for each hour of their shift. One man in particular struggled with that quota and was fired. He later became a boxer and quite a good one at that. You would know him as Jack Dempsey, arguably renowned as the greatest heavyweight boxing champion of all time.

We learned what a vein of ore looks like and we even got a rock sample each from the mine. I don’t think there’s as much value in all four of ours as the tour cost, but it’s always fun. One interesting tidbit. The guide hands back the tickets to each member of the tour, as he says, to be sure that he doesn’t leave anyone behind. Even though we were not the only tour members, each of us got back one of these same four tickets we took a picture of before we boarded the elevator car!

Lunch at the Home Cafe in Bronco Billy’s casino (we entered by the “family entrance” with our minor) was followed by another sample of the 2 mile high ice cream we had last week and then we made our way home through Florissant, driving past the Florissant Fossil Beds. All of us have been there a number of times, so we didn’t stop.

Several years ago when just Ben and Bailey were with us, we rode the Cog Railway to the top of Pikes Peak. That same year, I think our Georgia grandchild came and we drove up the Pikes Peak highway. Three years ago when Heidi’s family came, we drove up again and back in the 1980s, LeRoy and I, along with Robert (13) and Heidi (11) hiked the Barr Trail, both up and down. The only thing we lack is hiking the back side from the Crags, but for me at least, I think I’ll be happy with all the other ways we’ve made it to the summit. This week, we bought tickets for the Thursday afternoon 2:40 cog trip to the top again. What a day! We arrived at 2:10 to prepare to board at 2:20, but mechanical difficulties caused a long delay and we didn’t board until about 3:30. We were fortunate that the view was unclouded and spectacular all the way up and when we finally did arrive. The next train didn’t have that luxury, because the clouds rolled in just as we were leaving. Our trip provided lots of “AHHH” moments, though, including the part about being able to see Kansas from the top. 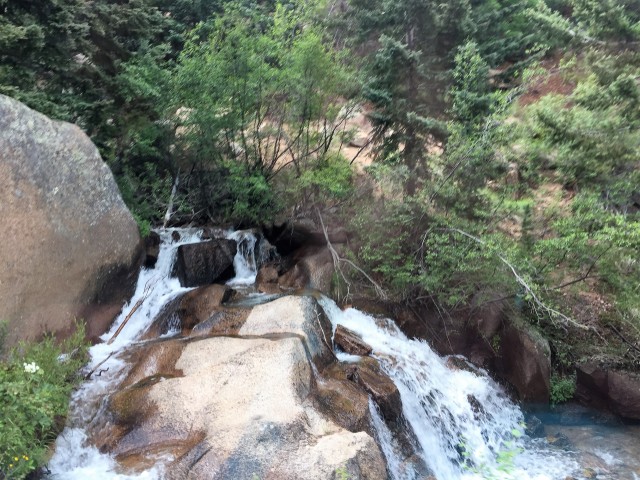 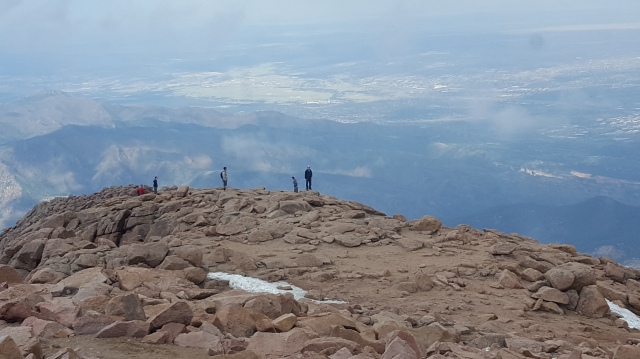 Sam, our conductor, was full of knowledge about all the scenery along the way. She even pointed out marmots near the top, but those little fellows were pretty camera shy.

Even though LeRoy and I had just been to the outlet mall in Castle Rock with the other senior volunteers on Monday, we forced ourselves to go back with Heidi and Jadelyn on Friday. I think you could say a good time was had by all. Jadelyn should be on her way to being ready for school and Heidi didn’t do too bad, either. So much fun for us girls, although I think LeRoy thought he was going to starve before we got finished shopping.

Since we were back on RV park duty Saturday, Heidi and Jadelyn checked out the Garden of the Gods on their own. 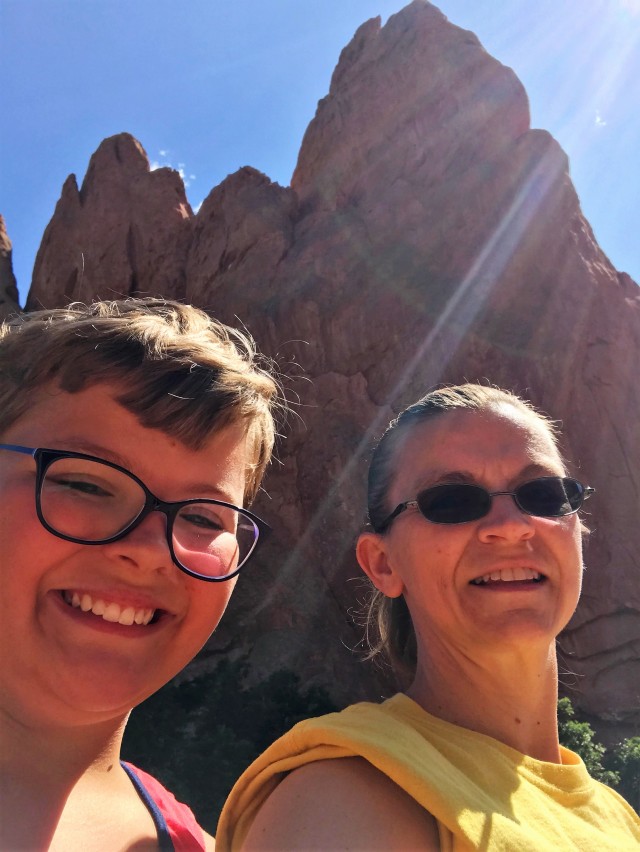 Tourism is always fun, but we also enjoyed many hours playing a card game our Nebraska friends Ron and Carol Young taught us several years ago, Tick. LeRoy usually doesn’t like to play games but he played along last night. He even beat us the first game! Not sure we’ll invite him the next time!

Now we’re back to an empty nest, since they left after church this morning headed back to Kansas.

Celebrate Independence Day wisely this week. We will probably attend Symphony Above the Clouds in Woodland Park on July 5, since it also includes a great fireworks display.