I thought we were retired??

More like, just tired after this last several weeks! As soon as we got back from Colorado, we started working on our little one bedroom rental house and it has consumed us the whole time. I kept hoping to have before and after shots to share, but if wishes were horses, then beggars could ride! Until the time we have a finished product, I didn’t want to leave the impression that we were sitting in our recliners with a diet Dr. Pepper or Coke Zero in hand.

The first thing that had to happen was the demolition of the kitchen. This little place used to be a one car garage with a lean-to on the back which became the kitchen. The total room size including all the cabinets and water heater is 8′ x 8′. The previous tenants, in their infinite wisdom, had painted the kitchen, bathroom and bedroom a dark chocolate brown, which made it feel even smaller than it is.The first picture is the entire east wall of the kitchen. The second is the entire west wall.

It all came out before we moved on to another room. Not exactly sure what went on in the bedroom but this window had not one piece of glass intact.

We knew that the kitchen could feel bigger and be more functional without the gas water heater in the corner, so we decided to replace it with a compact electric one that would fit under the counter in the new cabinets. That required moving both water and gas connections, so part of the kitchen wall had to come out to facilitate that.

The bathroom took much longer than we had thought since a considerable amount of time was spent getting the tub to drain…at all! And you don’t even want to know about the stool.

It’s really pretty amazing what five years of smoking in the house can do. We lived with the odor during the first weeks. The walls and vinyl floors were impregnated with the smell and stain. A coat of Kilz and two coats of fresh wall paint really helped and then it was out with the old floors and in with the new! 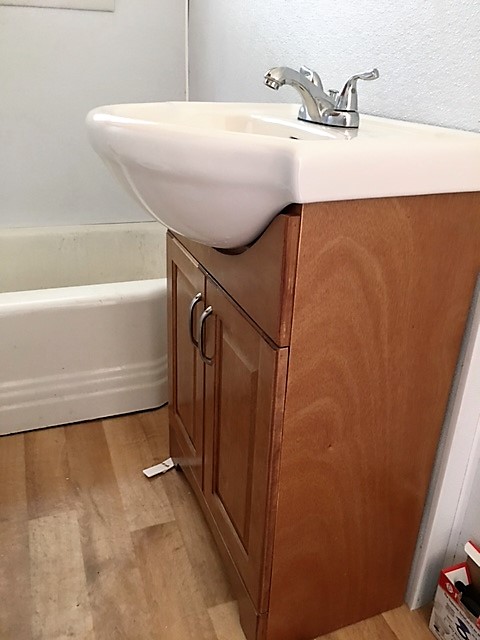 We bought unfinished kitchen cabinets and applied a pickling stain and clear finish. The uppers have been installed but the base is a little more complicated since it incorporates the water heater. 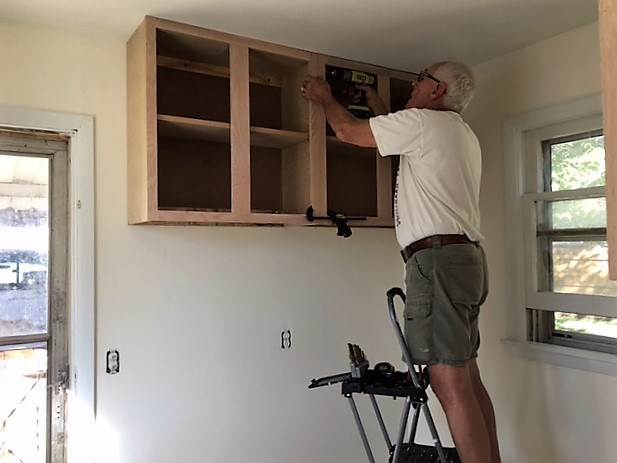 LeRoy had work to do at the Landing, too. He started preparing the bus roof for recoating while we were in Colorado, but with rains every afternoon, there never was a dry time to actually apply the coating. It’s always dry inside the bus barn, so it finally got completed. 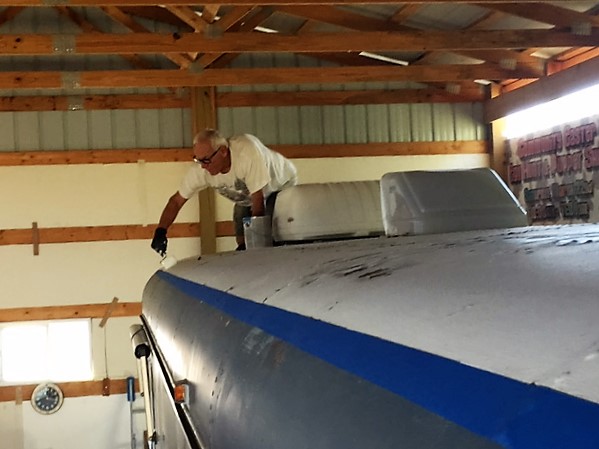 That picture required me to climb a ladder to the top of the bus, so I hope you enjoy it!

A week ago we drove the car to Tecumseh, KS for a family reunion for my mother’s side of the family. My favorite part of the family in attendance, of course, was my sister and brother-in-law. And we took our daughter with us for the first time, too. Unfortunately, Ray didn’t make this selfie.

We’re beginning to see the light at the end of the tunnel, but for the next two weeks or so, we’re resting up in Branson with our Silver Eagle bus friends.More on that later!