Monsoon? That’s something that happens in a foreign country, isn’t it? In fact, the very definition of the word monsoon calls it the seasonal wind of the Indian Ocean and S. Asia, blowing from the southwest in summer and from the northeast in winter OR the season during which this occurs, commonly marked by heavy rains OR the rainy season. The first time I heard the term “monsoon season” other than referring to another country was when our son was stationed at Ft. Huachuca, AZ. Tucson has been on the news recently for the moonsoon wind and rains there and the damage that has been done.

It wasn’t until we started spending summers in Colorado that we discovered the afternoon and evening rains we had always taken for granted here are actually the tail of monsoon rains coming up from far into Mexico. And now, it’s monsoon season here again. We’re having cool temperatures just about every day, along with cool, predictably rainy afternoons, sometimes on through the night. We sit comfortably dry and warm in our bus, remembering the nights shivering in a tent reminding our children not to touch the sides of the tent so it wouldn’t leak! For the past week and a half, our park here has been filled with Boy Scout tents and I’ve wondered how many kids woke up with dripping sleeping bags.

The Scouts left yesterday and they have been replaced by holiday campers, getting away from jobs and household chores for the long July 4th holiday. Deer meander through the RV park looking for the corn one of the volunteers puts out and the small children on bikes or on foot are in awe. They just don’t have it in them to be still enough to get close to the deer. Someone always has to run. We enjoy watching that interaction, though.

Early last week we had bus friends stop by for the night.  Facebook first brought us together with Jim Wilkerson and Wendy Crosby (mightybus.wordpress.com) and then we met them in person at a Blytheville, AR rally several years ago. This is the first time since then that we’ve been in the same place at the same time.

Monday afternoon they drove in, gathering attention as they came. If Liberty gets attention, their bus gets a mega share! Her paint scheme was done by a street artist and is really spectacular.

And just because you’ve seen the koi on the driver’s side, don’t think you would recognize it from the dragon side.

In addition to Jim and Wendy, the bus also carries Carmella and Astrid, their pretty cats. Carmella found the chipmunk hiding under the log fascinating. She waited very patiently but she never did catch it. 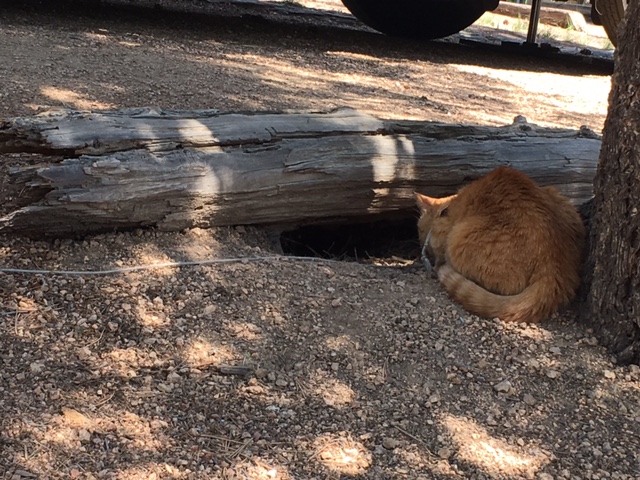