We left Wichita Monday morning a little earlier than we usually do, hoping to avoid rain coming in behind us and we succeeded. We didn’t run into any rain for 2-3 hours and even then it was minimal. We arrived at our RV stop in Rogersville, MO in dry weather.

Even though Rogersville is a small town, there are two couples there who are good friends of ours, Byron and Betty Pigg and Jim and Paulette Pruitt. And neither of them knew the other until we met for dinner! It turns out that they knew people in common but had never met personally. Piggs are friends of ours from Silver Eagles International and we meet up with them at bus rallies all over the country. Pruitts just bought their beautiful country home late last year. We knew them from Desert Trails RV Park in Tucson where Paulette spearheaded the hymn sing we attended even after we quit staying there. Jim hand made the shutters for their living room from reclaimed wood. 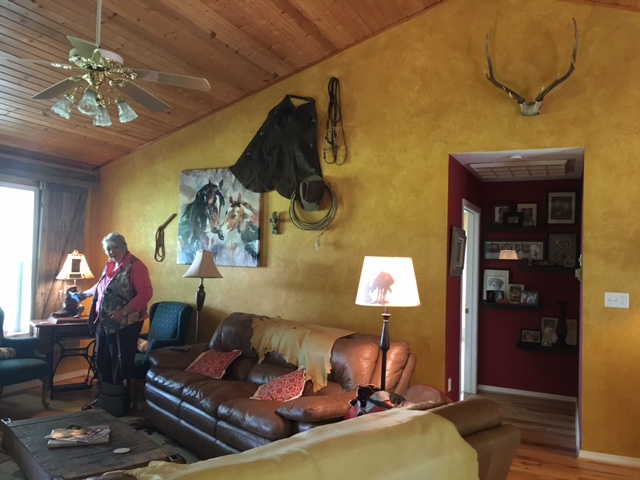 Quite a change from their tiny park model at Desert Trails!

The trip on across Missouri yesterday was pretty uneventful, including no winds for most of the day. The major downfall of taking Hiway 60 across to Kentucky is that there are two very high, very NARROW bridges right together, one across the Mississippi and the other across the Ohio. 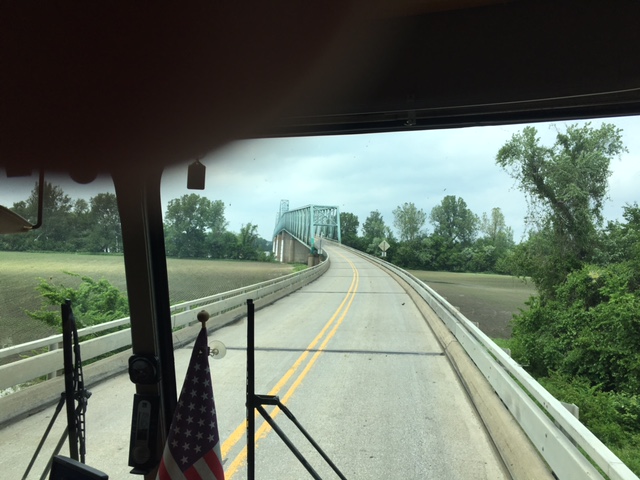 Did I mention narrow?

The mirrors didn’t scrape on either side and the tires didn’t scrub the curb but I sure was glad I wasn’t driving! God answered my prayer and we only met one truck on the second bridge. The mighty Mississippi was rushing along way down below, but you can’t see much with your eyes closed!

After a very stormy night in Clarksville, TN, including being wakened by two very close lightning strikes and HUGE thunder claps, we met up with my cousin Rhonda Melton Rose and a young friend we met in Colorado, Lindsay Tempro for lunch. Lindsay has just graduated from college with her nursing degree and took time out between classes to meet us. She suggested Baja Burrito and we really liked it. Maybe next time we’re in the area, we’ll do that again!

Tennessee is a long state and we hope to be in Sevierville by the end of the day, so we need to be motoring along! So thankful for Google Maps turn by turn directions!