After two weeks of the campground being full all week long, we finally have it almost to ourselves. Even the volunteers are clearing out. By the end of this week, there will be just two volunteer couples left and one of them is us! I’m hoping that our internet will be unencumbered enough today for me to get a blog done.

One of the most unusual things that happened during Tim and Heidi’s visit with us a month ago now was that the whole family (except me) did the 900′ zipline here at Golden Bell. The kids had ridden the 400′ one during the week before the parents arrived, but all it requires is climbing a tree to get to the top. The only way to the send-off perch for the 900′ zipline is up a 40′ climbing wall. Maybe if there was an elevator, I’d think about it. The summer staff helped get everyone into a climbing harness and belayed the climber all the way to the top. That’s Bailey toward the top and LeRoy in the red, white and blue shirt. 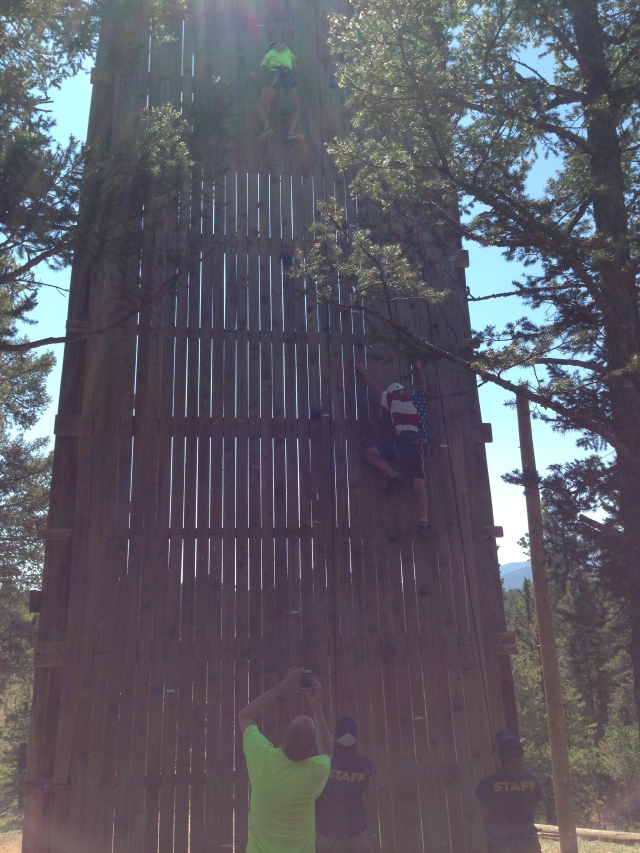 Jadelyn got to the top for her second ride by the power of scripture. She started saying “I can’t!” just a short way from the bottom, but Tim kept quoting Phil. 4:13 and making her repeat it. “I can do all things through Christ who strengthens me!” It took a while, but she and her faithful belay-er got her to the top.

The young man at the top said he thought LeRoy was the oldest person he’d ever had on the zipline, but that by no means meant that he was the most sedate! I made a video of his “flight” which I posted on Facebook and I called him LeRoy the flying squirrel. Wish I could share it here but I haven’t upgraded to be able to use video.

We also drove up Pikes Peak that week. We’ve hiked up the Barr Trail, ridden the cog railway and driven up several times but I never get tired of that mountain–MY mountain, I call it. We had the kids go down over the edge from the summit and come back so it appeared that they had hiked up, but without that effort.  The clouds pretty much had the view of Colorado Springs obscured that day even though it was sunny on top. 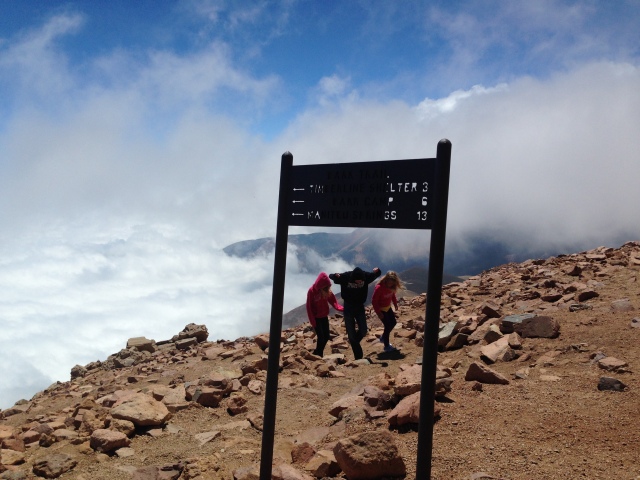 Clouds have obscured everything these past couple of week. We’ve had high temps in the 50s most days and lots of rain so it’s nice to see the sun and be able to put the top down on the convertible today. One not-quite-raining day last week, we met some of my cousins for lunch and spent a fun afternoon just catching up. Ed and Rhonda Rose live near Nashville, TN and we’ve seen them within the last couple of years but I hadn’t seen Rhonda’s sister Rita Faber from TX since she was a child. Both of them are quite a few years younger than I. I had never met their half-sister Twyla Martin until two years ago and that was very brief, so I was glad she came with them. Twyla looks a lot like her dad, my Uncle Sterling, and since he and Mother looked quite a lot alike, I found myself seeing my mother’s smile every once in a while! You’ll recognize LeRoy and I on the left, then Twyla in the Hawaii shirt, Ed and Rhonda next and Rita on the right end. We loved spending that afternoon with all of them. LeRoy thinks I have a pretty neat family and of course, I do, too! 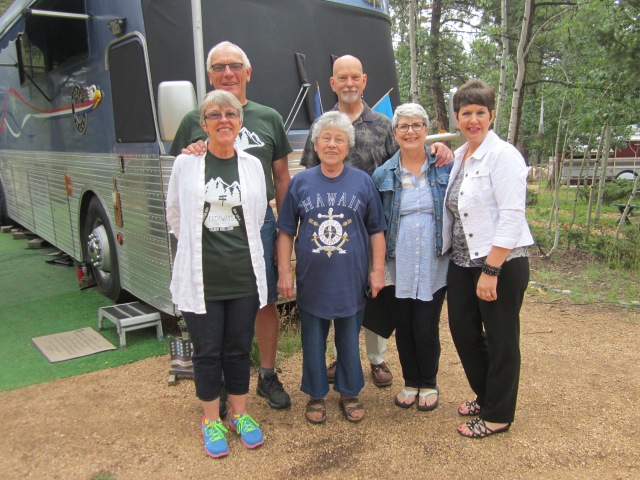 I’m tired of fighting the internet! In just under a month we’ll be heading back to Kansas. Keep the weather nice for us, will you?

Retirement agrees with us! After traveling in our 40' Silver Eagle bus conversion, whose name was Liberty, since 2010, it was time for a change. Now we spend the winter in Yuma, AZ and travel during the spring, summer and fall setting the Pace!
View all posts by 2010liberty →
This entry was posted in Golden Bell Camp, Uncategorized. Bookmark the permalink.