Something new every day!

When you’re on the road, you miss having time with grandkids. Here in Tucson, we’ve adopted a surrogate grandchild, our pastor’s son Nathan. He just turned two and he’s a very busy, inquisitive little boy. We had the chance to babysit one morning while both his parents were working and what fun we had! Nathan learned my name the day we went to Tubac with them but he couldn’t manage “LeRoy”, so I suggested that he say Papa. He has come to associate Anne and Papa with “da bus” and he didn’t mind at all spending time here. First item on the agenda was ringing the doorbell. He quickly figured out that if he pushed the button by the door, the music would play and he could dance. LeRoy changed the song several times and sometimes Nathan would just shake his head and say NO! until another song played. I guess it had to have a beat and be something he could dance to! Even more fascinating than the doorbell was driving and every driver knows you need to turn the turn signal ON and OFF, repeatedly. 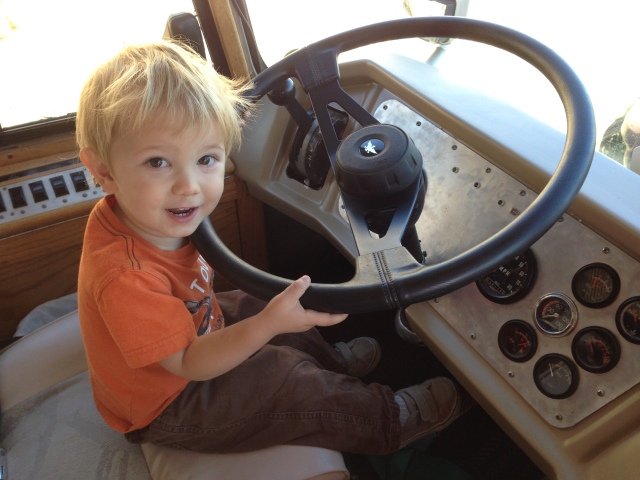 Each year the Northwest Community Friends Church here in Tucson has the granddaddy of all rummage sales. This is the first year we’ve been involved in the setup and it is a week-long event. Since the sanctuary here is really a multi-purpose room, the preparation began last Sunday afternoon by removing all the chairs and setting up tables. The sale is very well organized with dishes in one area, other kitchen utensils and pots and pans in another, linens on one table and clothing on two rows of tables and hanging against one wall. One small classroom was all electronics. When LeRoy worked as a landfill inspector, he said that there was always a reason that things came to the landfill. Usually they were either very old and outdated or they just don’t work! The same is generally true of the electronics that come to a rummage sale: lots of cords without any associated device, as well as devices without associated cords and none of them match up; VHS tapes and cassettes and even VCRs and inoperable DVD players. 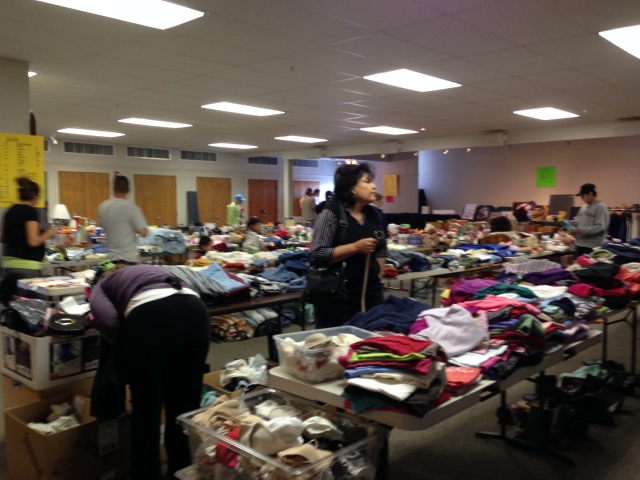 We threw another activity into the mix this week. When my sister Florence Marie visited this winter, she decided she’d like to come for a longer time next year and would like to have a space of her own. Together we decided that it would be just at cheap to buy a small RV or trailer as it would to find a rental unit, so LeRoy researched the local market. We looked at some pretty poor examples early in the week and then found an older but well maintained Allegro. 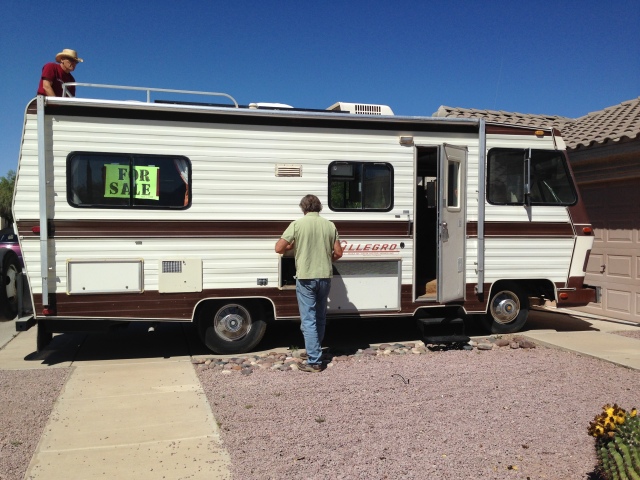 True to its 1980s roots, the interior is rusty/burnt orange but it has all the necessities including a tiny bathtub.

One of the perks of helping to set up the rummage sale was that we were able to pick up some early bargains to help furnish the “new” kitchen. LeRoy has had the bulk of the work to get it ready to store here in Arizona but mostly I think he has enjoyed himself.

The sale started at 8 am Saturday and by 4:30, all the tables and their contents had been put away and the sanctuary was ready for a worship service this morning. To top it off, the proceeds were more than $2300, all going to missions. We got much better acquainted with some of the church members and felt a real sense of accomplishment at the end, mixed with a very real feeling of exhaustion!

This week we’re looking forward to seeing our son Robert in Sierra Vista. He’s coming to Ft. Huachuca for a few days of training and we’re planning to meet up for dinner one evening since he won’t be at home in Texas as we leave here. Next week after church we plan to leave for Kansas for a few weeks before we go to Colorado for the summer. Lots of adventures coming up. See you on the road!

1 Response to Something new every day!