Well, we’ve been so busy enjoying family in our beautiful Colorado paradise that I didn’t take time to write a blog. On the other hand, we’ve taken enough pictures to furnish material for several new posts, so if you don’t mind me flashing back to Colorado while we’re in Missouri, I’ll share some of everything.

On Friday of last week, we moved from Lake George back to Woodland Park and that evening our daughter Heidi, son-in-law Tim and their three youngest kids met us there. After watching the opening ceremony of the Olympics, we sent Mom and Dad to a motel and put all three kids to bed here in Liberty to rest up for a hike the next day.

Since the Florissant Fossil Beds has several moderate hiking trails, we thought we would find something appropriate for the flatlanders who had just arrived at altitude. We’ve been here since mid-June and I still have to stop after the ascent of big hills to catch my breath. Of course, we need to keep hydrated, too, so that’s the best excuse to take a drink. We decided to take the Homestead Loop since we knew there would be reinactors to show us what homesteading would have been like. Some of us got far enough ahead up the hill to get a picture of the rest of our bunch along the trail. 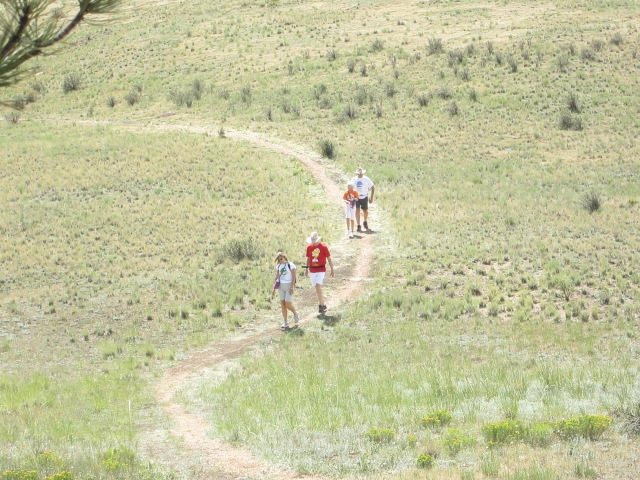 You can see why we were so spread out. Here’s a picture of Papa with Bailey, doing what he did best–teach nature lessons.

When we got to the homestead, we were treated to several displays of the homesteading lifestyle. The first was a quilter in the parlor who had her handiwork on display while she worked on a small quilt.

In the corner of the parlor a woman was spinning carded wool into yarn. It reminded me of my friend Carolyn Wright who is also a spinner. We used to go hunting plants for native dyes together long ago in western Kansas. 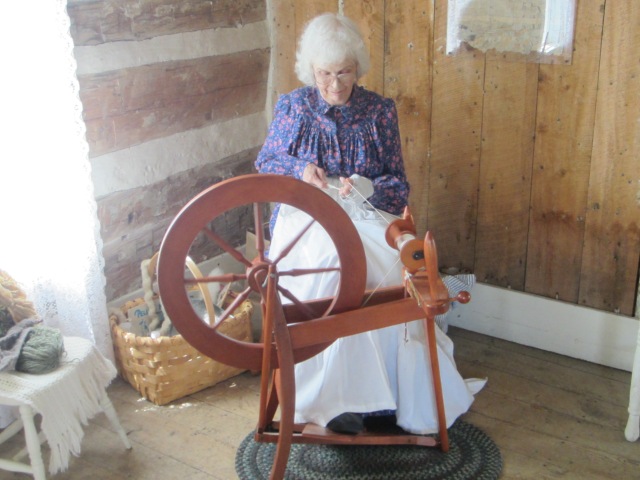 The next room was Adeline Hornbek’s own bedroom and another pioneer woman was carding the wool, straightening and cleaning the fibers to make them ready for spinning. That woman gave us a tidbit of vocabulary that was new to me. In an earlier time, the single daughters in the family took care of the carding and spinning of the wool, thus the term “spinster” used for unmarried women!

The kitchen provided treats cooked on the wood stove. The rising bread had been in a draft, but the finished product tasted great regardless. The hand-cranked ice cream was made from goat’s milk and some of us had a taste of the milk itself.

After looking through the remainder of the buildings on the homestead, we checked out the root cellar that was dug into the hill. Dark and not too damp inside, it would have been a great place for storing root vegetables from the garden for the Colorado winter.

Next on the agenda was a trip to Cripple Creek. Our family used to love the quaint little town of Cripple Creek but it became a gambling mecca quite a few years back. One of the remnants of the early mining days there is a herd of free-roaming wild burros. Well, fairly domesticated any more, since tourists like to feed them! Some of the members of our group liked the donkeys more than others.

The one remaining store left from the days we used to enjoy is the general store, home of the 2 mile high ice cream cone. We checked out several of their flavors, on regular, sugar and waffle cones and came away sticky and full.

We enjoyed the Heritage Center on the outside of town, too, and we’d recommend the free three-story center to anyone interested in the Cripple Creek-Victor gold mining district.

More on that area later. Tomorrow morning we’re pulling out, headed back to the heat of a Kansas summer and to take Ben and Bailey home. We’ve had such a wonderful few days and made so many shared memories. It will be quiet in Liberty when we leave for Missouri on Sunday afternoon or Monday.

2 Responses to Too busy!