You know, people often talk about going to “the mountains” and everyone nods and has their own picture of what that looks like. Just a week ago, we met some folks in Manitou Springs who used to live in Pennsylvania in what they called a “mountain cabin”…until they came to Colorado! Two or three thousand feet of altitude can’t compare to being surrounded by 14ers! Now they call that house the forest cabin and they live in the Colorado mountains. We fell in love with the high mountain meadows of Teller County sometime in the late 1970s, I think, and have never really spent any time on the western slope, although we have friends who go there frequently. The Rockies west of Denver are much more “rocky” than the area west of Colorado Springs. To each his own, I guess.

Earlier this summer we were pushed by the Waldo Canyon fire into Park County, just west of Teller County, so we decided to check out what it had to offer by way of scenery. Last week we went to the area around Fairplay. This week, we did a little hiking back in Teller County, at the Florissant Fossil Beds and then did a day trip yesterday to Tarryall Reservoir.

The Florissant Fossil Beds is a national monument that we’ve been acquainted with for many years but have never hiked there.  The big (no pun intended) attractions are petrified redwood stumps. The stumps themselves are massive, but when you compare their girth to the current pines growing in the area, it’s hard to comprehend the size of the full grown trees!

Many years ago, visitors to the area felt free to take pieces of the stumps and even commercial vendors tried to saw off pieces. Fortunately, the stumps were mightier than the saw. You can see part of the blade embedded in the tree!

The Hornbek homestead is located on the property and the trail we took was a combination of the Petrified Forest loop and the Hornbek Wildlife loop, just about 4 miles in all. Even though the temperatures up here are probably 20 degrees cooler than just 30 miles or so away in Colorado Springs (and maybe 30 degrees cooler than our Kansas and Nebraska family experiences), the air is dry and water is very important. The rangers even checked to be sure we had water along before we left the visitors’ center.  The rock formations are so interesting and the breeze through the trees was so peaceful that we decided to take a lunch break here.

On top of the ridge stood an old dead pine, still holding ground before giving way to nature and falling to become part of the forest floor. Our kids had a children’s story about the life, death and rebirth of a tree and I was always fascinated by it, probably more than the kids were.

Yesterday we decided to take a drive to the Tarryall Reservoir just to see where and what it was. The drive across the twenty-some miles to the lake was beautiful and there were numerous historical sites along the way. The town of Tarryall is several miles from the actual reservoir. There isn’t much left there except the old school building, complete with outhouse and playground equipment, and a few residences. There were, however, lots of kids and dogs! 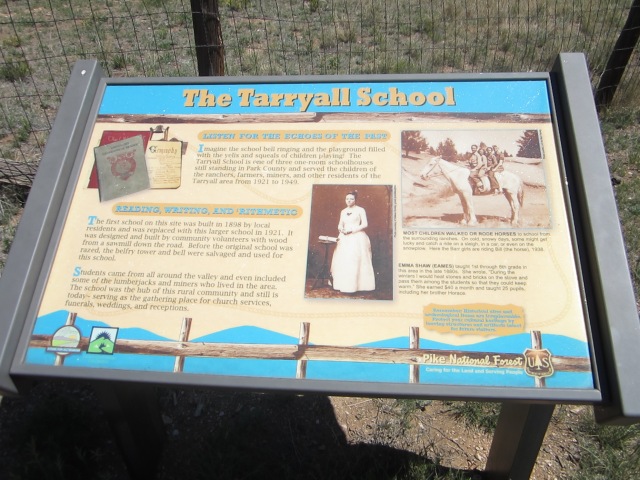 We drove through meadows with a stream,  Tarryall Creek, winding its way through them, with more brush than we are used to seeing. As dry as it has been, the stream was somewhat lethargic, but it was easy to imagine what it would be like in late spring with lots of snow melt adding to it.

In a beautiful valley totally surrounded by towering peaks we found an old log homestead. From the very early picture nearby, very little has changed in the last 100+ years, except that the place is boarded up now. It looks so small against the backdrop of mountains, but was really fairly large for the time.

When we lived in Kansas, we heard lots of complaints about potholes in the streets at the end of the winter season. But let me tell you, when you begin to see road signs that say “Road Damage next 26 miles”, you discover you didn’t really have much to complain about at all! The pavement was only a few inches thick to start with, but we dodged holes in the middle of the road, erosion at the edges, ruts and bumps until just about Tarryall Reservoir, where the road had been newly paved. But had we come from the other direction, we would have missed all that beautiful valley. The terrain changes dramatically on the other side of the lake, turning into rolling, grassy pastures that are very much horse country.

One of the things I’ve found interesting is the role that women played in the history of this whole area. The Hornbek homestead at the fossil beds was homesteaded by a single woman with her children. The first people who stepped in to protect the fossil beds and petrified trees were a trio of women. One sign on the Tarryall trip told of a woman who rode her horse alone from Lake George up through this valley in the middle of winter, which meant deep snow, and wrote back to her sister in England about what she had seen. 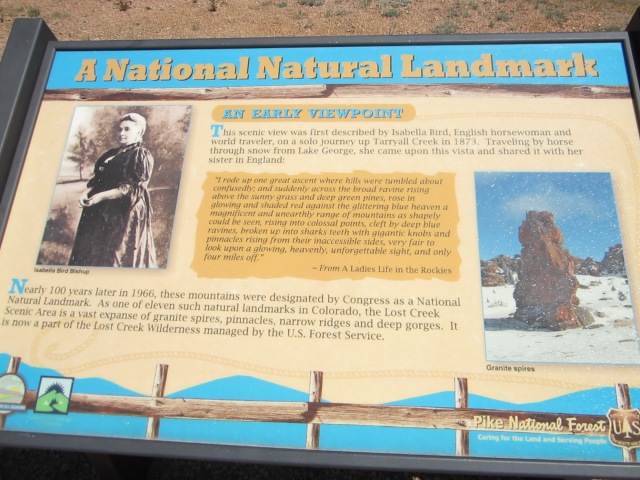 Diversity of culture, diversity of nature and diversity of talents are what make this such a delightful adventure for LeRoy and me. Wish you were here and happy travels!