A week of requirements is a good thing

This week we’ve gone back to requirements, places we had to be and times to be there. Can’t say I like that overall, but it’s nice to be of service.

During this past year, we’ve had a property manager for our Wichita rentals but he’s asked to be replaced and since we are in the area, we started clean up on a vacant house. We’re thinking about selling the properties, so we hired someone to do a little more extensive maintenance than we might do otherwise and I met him at the property Monday morning. LeRoy had to meet him again yesterday after we’d received his estimate. Time will tell about where we go with those houses but I can tell you one thing. I REALLY don’t like cleaning someone else’s stove! Enough said.

That same day, I had offered to take my friend Carolyn Hinshaw to a post-surgery doctor’s appointment. We’re always faced with a dilemma when one of us wants to go somewhere with the car and the other doesn’t need to go. It’s been a process, this learning about having only one vehicle again! Someone always gets left at home. LeRoy spent the day working around the new building, manual labor that was probably more than a day’s worth. Where’s a good hot tub when you need one?

Tuesday I had a “beauty” day, catching up with Mileta Kinser for a morning of pampering. I needed to replenish my face care supplies and of course I had to have some of the new things that promise to defy age and make me more beautiful. I sort of think it’s too late, but one can always hope.

This week is State Fair week in Kansas and before we got back here, we had thought we would like to go. So last week when Glenna Dellenbach called to ask if we would be available to help with a booth, I said yes. We spent Wednesday at the Woman’s Christian Temperance Union booth in its familiar place under the grandstand at the fair. The WCTU has had a booth since the very beginning of the fair, I think. My mother was a WCTU member most of her life and even served as state president when I was in high school, so this wasn’t my first experience at the fair booth.

The little man with the book is always an attention-getter. One man came to have his picture taken beside it. His father was an electrician and the little man had been in their basement more than once to be repaired or refurbished. Others came to show him to friends who were first-time attenders to the fair. Most people fit into two categories. They either were totally spooked by the weird eyes and moving eyebrows or they were mesmerized.One little fellow in a stroller sat and watched the man while his mother was doing something else entirely and when she started to push him on down the aisle, he smiled and waved to the little man. His mother wasn’t aware of any of it! 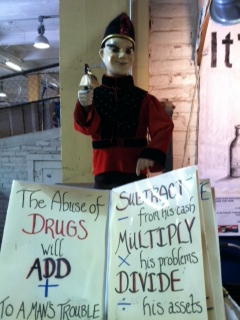 Another feature of the fair, the butter sculpture, has changed this year.  Each year about 800 pounds of butter goes into a sculpture in the Pride of Kansas building, but in my memory, the sculpture has been of a cow. This year, it is a combination of things with the centerpiece being a monkey riding a sheep! 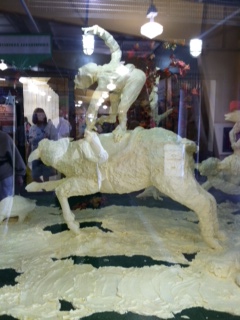 Thursday evening we ate dinner at our daughter Heidi’s house with her husband and family to celebrate my birthday. Being with family is always so much fun! And good food thrown into the mix makes it even better.

I have always been fortunate to have women friends whose birthdays were either within the couple of days before my birthday or a day or two after. We have celebrated together many times, but yesterday I spent my birthday with one of those friends in an entirely different way. We attended a funeral. My friend asked if I would ride along with her to Greensburg to provide moral support, so even though I didn’t know the family involved, I agreed to go. The trip to and from Greensburg was very enjoyable. I can’t remember a time when she and I have spent that much time together without our husbands along! We’ve known each other for more than 30 years, so we had lots to talk about.

Another year, another number to remember—66. Life goes on! We’re on to bigger and better things.