Seeing the Sights of Yellowstone

I guess I never become jaded about what our great country has to offer by way of scenery. I was particularly eager to see Yellowstone because I have vague memories of the family trip we took when I was in early grade school. I remember Daddy feeding bears out the car window, which today would get you a stiff fine if you were caught, as well as possible dismemberment if the bear wasn’t happy. I remember Old Faithful, too, but none too clearly.

Last Tuesday, we left Liberty behind and, along with a friend from Colorado, drove to Yellowstone in the PT Cruiser. It was about an hour’s drive to the east gate of Yellowstone and one of the first sights to meet us was dead trees. We had seen places in Colorado where some of the trees have been killed by a pine beetle, but it was truly disheartening to see nothing but dead trees for long stretches.

Knowing how long it takes a tree to grow, parts of this park will be barren for many, many years. It just looks like a forest fire in the making. Fortunately these dead areas did not make up the majority of the loop where we drove. And even where the trees were dead, the wildflowers were in full bloom. 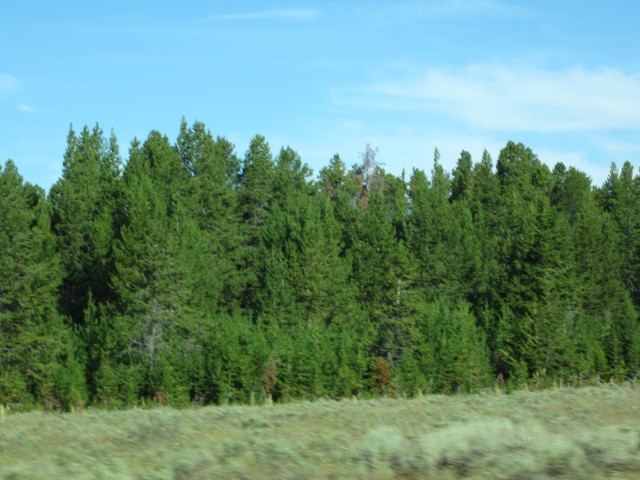 One of Yellowstone’s most famous sights, of course, is Old Faithful and of course we had to see it. Unlike what we’d heard from friends this summer, it was still going strong, spewing over 100 feet into the air for a couple of minutes. Beaker, our ride-along Eagle companion, enjoyed the view as well.

The real show, though, was just a bit later from Castle Geyser. It spouted nearly as high and put on a show for about half an hour!

The thermal basins along the roads leading to and away from Old Faithful were really beautiful. Each seemed to take on its own special attributes, maybe muddy bubbles struggling up from a deep pool or maybe beautiful colors in the sediment.

To put it mildly, I’m not a real fan of heights, but without extreme drops, you can’t have waterfalls and there is nothing more impressive than the awesome power of a waterfall. We pulled over numerous times during the day to walk to an outlook of a waterfall. Sometimes even if you couldn’t see the falls, you could hear the water crashing on the rocks below. The canyons and falls were just indescribable. 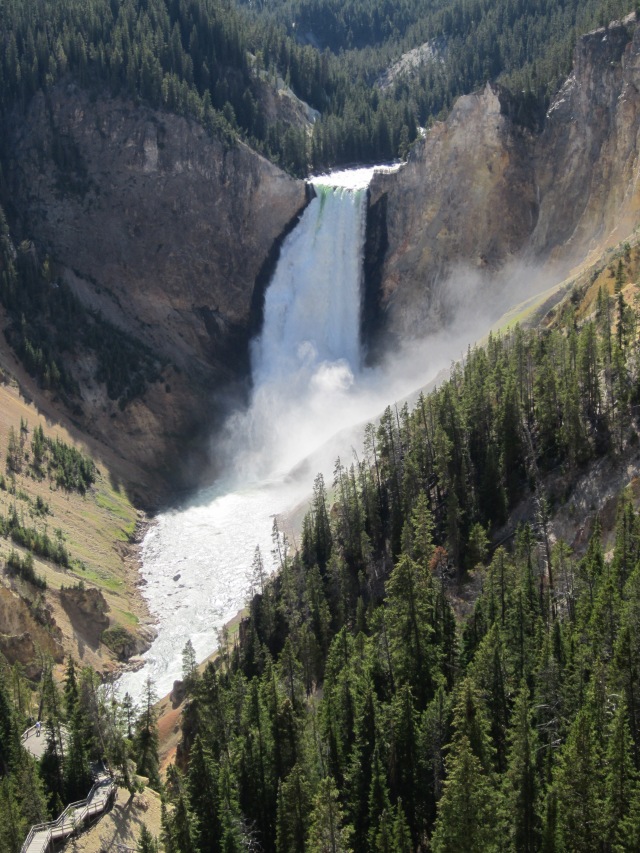 I didn’t climb the stairs you see in the picture, but I did sit on the stone ledge long enough for pictures!

Our Colorado friend, Carole Gourley, probably thought we took every scenic turnoff there was all day, but we didn’t want to miss anything. We only had such a short time and we really saw so very little of what Yellowstone has to offer.  Due to an earlier injury, we didn’t try to take any hikes, so we have plenty to do another time.

While we had hoped to see lots of wildlife, our biggest sightings were bison, bison and more bison. No bears, no elk, no moose, not even a wolf. These big critters had no qualms about holding up traffic and didn’t budge for anyone. Although there were signs everywhere saying stay in your cars, bison can gore you, it didn’t seem to stop the tourists. These pictures, though, were taken from INSIDE our vehicle!

While waiting on the benches around the geyser, we (surprise, surprise) struck up a conversation with the people around us. In the course of those conversations, we learned that scenic beauty is definitely in the eye of the beholder. The truck driver who grew up in Nebraska thinks there is nothing to see in Kansas, but that Nebraska is a pretty state. As we drove across western Nebraska today, it looked pretty much like Kansas to me! The one that really got me, though, was the lady from near Wichita Falls, TX, as deserted a place as I’ve seen, who thought driving across Colorado was boring! Granted, they came across on I-25, but she must have been looking east instead of west or those mountain vistas would have taken her breath away. At least they do ours!

We’ve been on the road exactly one year and we’ve seen a lot of this country. Is some of it flat? Yes. Dry? Yes. Boring? I don’t think so! It’s all beautiful in its own way. If nothing else, we’ve enjoyed seeing the change of vegetation in just a short distance down the road, or a total change of eco-systems from one side of a canyon to the other. God left us a lot to discover and we’re just beginning!

3 Responses to Seeing the Sights of Yellowstone