New Orleans. What can I say that doesn’t sound like “me, too”? We pulled into New Orleans yesterday afternoon and went to the French Quarter to find dinner.

We parked in an open slot on the street and as we got out of the car, a man came out of the store on the corner. He said “Sir, I’ve been watching them tow from that corner all day.” There was just enough room to back up behind the pole, beyond which he told us he thought it would be safe(??) and there weren’t any no parking signs in that whole block. How’s that for a reassuring start to your evening? (The car was still in its parking place when we returned!)

We walked around awhile before choosing a bistro for our dining enjoyment. Good food and neither of us ate Cajun this time. After dinner, we walked up Bourbon Street. The night life draws some strange folks! And even though we’re a long way from Mardi Gras, there was a skimpily clad young woman throwing beads off a balcony, just like you see on TV.

I enjoyed the bronze statues we saw, especially the jazz greats while we were listening to a band called Steamboat Willy. I remember listening to Pete Fountain when I was playing clarinet in high school. 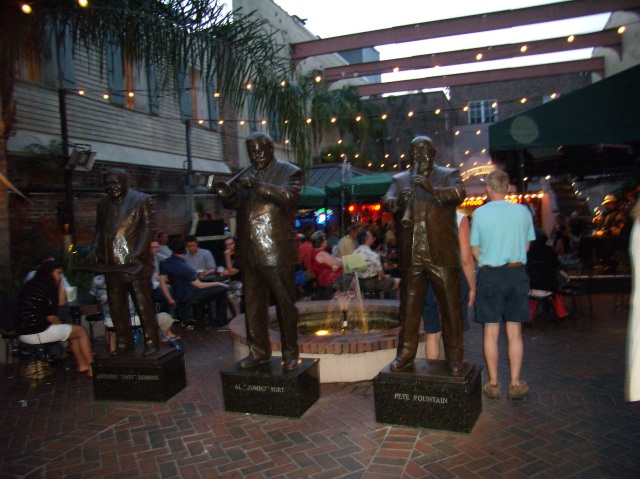 Since I posted on Facebook last night that we were trying to decide what to see, I had response from several people with suggestions. So today we checked out the Riverwalk and the French Market on Decatur Street.

The Mississippi River always amazes me. When we lived in Memphis, my office overlooked it and I could look out and watch a working river, with barges and once the Mississippi Queen riverboat cruiser. Here in New Orleans, the Natchez provides river and harbor cruises, either with or without a meal. It is the last authentic steamboat on the Mississippi River.

One fun feature is a steam caliope on top playing songs we recognized, mostly river-themed. If you look closely, you can see the steam coming out of the pipes.

We didn’t take a carriage ride but they are available and lots of people seemed to enjoy them.

And, there were street performers everywhere. Some of them were really good and some sounded like a fifth grade band. Fortunately we could just keep walking if the musicians wasn’t so great. Across the street from the carriage rides, a group of break dancers were performing and the audience loved them. 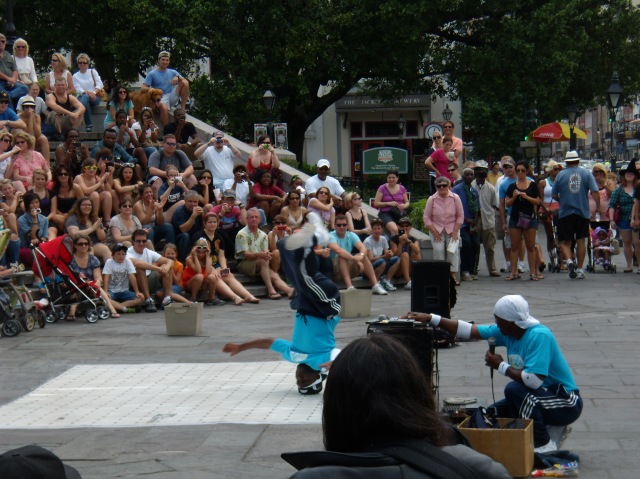 One band called themselves the College Fund Band and their open instrument case was filling up fast outside the DuMonde Cafe where we ate our first beignets ever. They taste a little like funnel cakes only more dense, but piled with powdered sugar. You know, you can’t stack powdered sugar in the wind, so we (and everyone else around) was pretty much covered.

Before we headed back to Liberty, we watched several cargo ships heading toward the Gulf.

I had wondered if we would see the effects of Hurricane Katrina and we did, to some extent. We could have taken a post-Katrina tour if we’d been willing to pay the price, but we weren’t. Our RV park had 3 1/2 feet of water, the manager told us and his personal residence had 8 feet. He’s living in Baton Rouge now and coming here for his work week, then home for his days off. Many of the neighborhoods we could see from the highway have unrepaired buildings right next to new or refurbished ones and it’s apparent that those areas are better now than before.

New Orleans is something every flatlander should experience. Talk about diversity! This is one of the best places for people watching I’ve ever seen. Anything you want to eat is available, I think, and more shopping than we could take in today. We’ll be on our way again tomorrow, planning to be in Atlanta mid-week.