What is a desert? Technically, it is a dry, often sandy region of little rainfall, extreme temperatures, and sparse vegetation. Look around here in Arizona. You’ll see lots of varieties of cactus, very little grass and even less water.

Remember the song “Horse with no Name”? “On the first part of the journey,  I was looking at all the life. There were plants and birds and rocks and things. There was sand and rocks and rings…” Well, all that is true, along with blue skies with no clouds and heat and dry ground. Yep, our surroundings qualify!

Just a few miles away in the desert we found a real jewel, the Arizona-Sonora Desert Museum. It’s a well known zoo, a museum of natural history and a botanical garden (although it doesn’t look anything at all like Botanica in Wichita!) The statuary alone is worth the price of admission. These javalinas are in the entry courtyard. 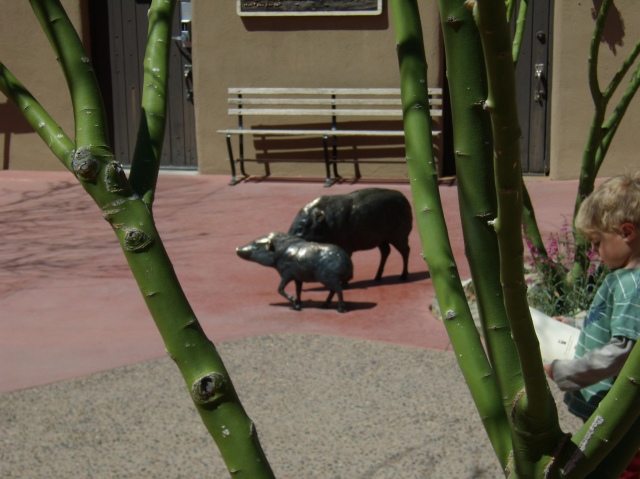 The first exhibit we saw was snakes, other reptiles and amphibians of the Sonoran desert. Typically, there were several kinds of rattlesnakes, some familiar and others not so. Since they were all behind thick glass, I didn’t get any very good pictures but that was probably just as well!

We also visited a “cave”, complete with stalactites and stalagmites, with exhibits of area minerals. I don’t think I’d ever seen what gold or silver would look like “raw”. The selenite display made us think of the hourglass selenite crystals that grow at the Salt Plains outside LeRoy’s hometown of Cherokee, OK, except that the hourglass was missing in these specimens. Oklahoma is the only place the hourglass ones grow.

My favorite part of the day was the Raptor show mid-afternoon. We saw a “family” of Harris hawks, 6 in all. They soared and dived for prey right above us as they flew out over the desert. One brushed LeRoy with its wings as it came in for a landing. 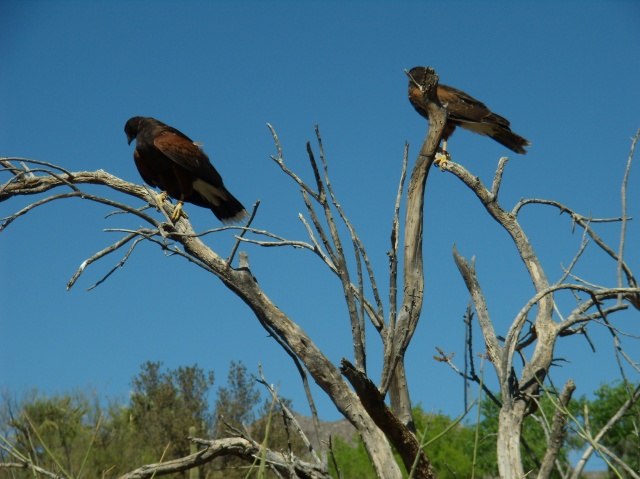 After the hike through the museum, we drove over Gates Pass and into Tucson. When you’re used to Kansas scenery, you never really take the mountains for granted. Colorado Rockies have been part of our lives since our kids were very small, but they don’t share much (except altitude) with the desert mountains we’ve seen since we hit the road in August. God sure knew what He was doing when He created the world, didn’t He? It could all have been flat and black and white and we would never have known the difference. Instead He gave us variety in abundance. Thank you, Lord!