Today has gone from the sublime to the ridiculous. The weather was perfect, sunny, warm and not windy. The seminars were informational and filled with laughter. We had a pizza party for supper. What more could anyone want?

How about a beauty pageant? Well, when the beauties came with such names as Kandy Kane, Armenia Pitts, Claudia Klepto and Lotta Hottie, you might know something strange was afoot. 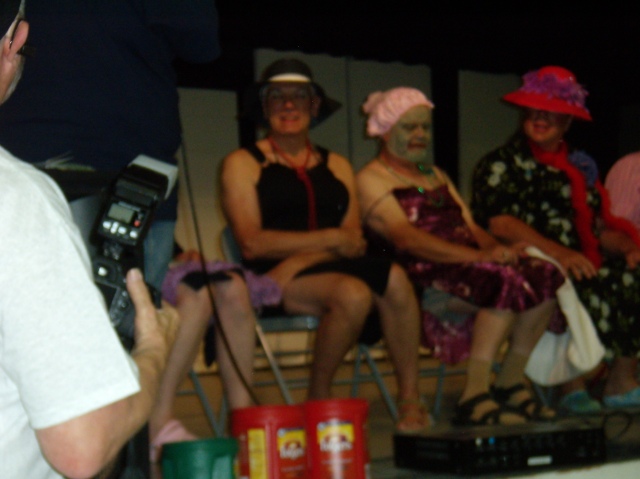 These sexy “ladies” may have been lacking somewhat in decorum, but they made up for it in creativity. The beauty in the black hat might be someone you recognize.

The 9 contestants raised over $350 for charity at the end of the evening.

One of the seminars today was Staying Married and Happy in an RV. It was led by a panel of full time RVing couples. One had been married almost 49 years, another 13 and the newlyweds had been married less than 3 years. A couple of the things the older couple, Tom and Barb Westerfield, said had LeRoy and I looking at each other and asking “Might they be Friends?” (Evangelical Friends Church, for those readers who don’t recognize the term.) So afterwards, we asked them what their church background was and we were right. They belong to the Friends Church in Fresno, CA. Our next question was, do you know Larry and Mileta Kinser? And their answer was yes, of course they do. Larry and Mileta have been friends of ours since the  ’70s when they were fresh out of college and touring as musical evangelists. They were the first full time RVers we ever knew! Last spring, as we were preparing to retire and be on the road, Northridge Friends Church, our home church, hired Larry as Administrative Pastor. It is indeed a small, small world!

Later in the evening, I took LeRoy to Dairy Queen to drown his sorrows over his loss in the Cactus Queen race and we met up with Westerfields again, along with Nick and Terry Russell, the rally organizers and Greg and Jan White who are also presenters. Again the small world thing! Terry was born in Newton, KS while her dad was stationed at McConnell Air Force Base and Tom Westerfield’s ancestors lived in Newton, also. We have to be on our best behavior at all times, because who knows when we’ll meet someone who might tell on us?