I mentioned yesterday that LeRoy got a haircut and today it was my turn. As a full timer, changing hairstylists is one of the more traumatic changes a woman must make. For that matter, even when staying in a sticks and bricks house, finding a new hairdresser is a LOT bigger deal for a woman than it seems to be for a man. At least in this case I didn’t have the feeling of cheating on my stylist, since I’m several states away. Women readers will understand…men, don’t even try!

Next problem was getting someone who would cut my hair the way I want it cut. Since Lisa, my Wichita stylist, had suggested a cut similar to Jamie Lee Curtis’ style, I decided to print her picture from the internet to take along. I thought that would make the cut pretty easy.

Since I had finally come to the point of needing a cut sooner rather than later and I don’t know anyone here to ask about who would be good, I went to a salon in the mall where I could walk in and get an appointment. I showed the picture to the stylist and she asked a few questions, nodded and started with the shampoo. The cut was next, most of which I couldn’t see since she kept my back to the mirror, and then the style. That was the point at which I was pretty sure my hairstyle wouldn’t be looking much like Jamie Lee’s. Lots of product and a styling iron (a tiny flat iron used like a curling iron). It’s not a bad hairstyle, just not exactly what I thought I wanted. 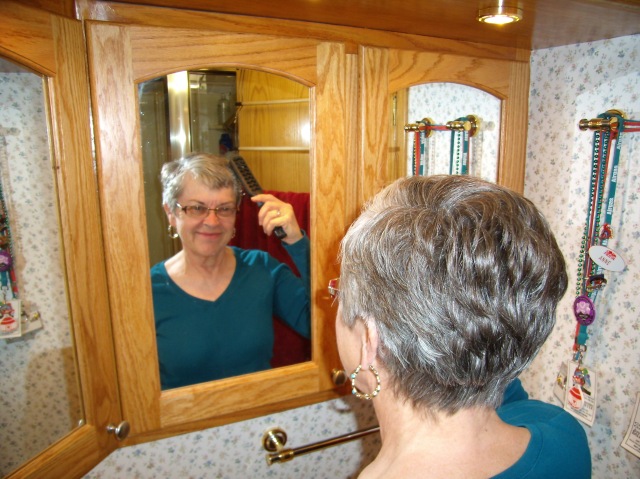 So like a lot of women, I came home to do it over! It’s actually pretty stiff at this point so I’ll have to wait until I hit the shower to make it better. And the verdict is out on the haircut until I get a chance to style it myself. But on the plus side, it is shorter and I’ll be back in Wichita by the time I need it cut again. Fair warning, Lisa Leslie, keep an appointment open!